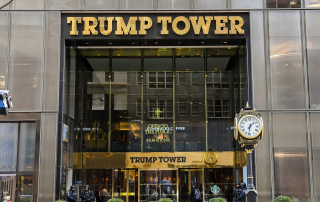 Love him or hate him, Donald Trump is a successful businessman with strong leadership skills. Regardless of your political viewpoint, Donald has been successful in business and real estate for the many years. The business world has known him for his real estate successes and mainstream America recognises him for The Apprentice television series. Even more recently, with his decision to run for President (and win), he is a part of popular American culture and now many a great dinner party discussion.

You might argue that Donald Trump is arrogant and could, perhaps, even be diagnosed with narcissistic personality disorder. Regardless of the viewpoint, it takes a confident person to be able to lead others effectively (or ineffectively). Can you remember the last time you were influenced by someone who lacked confidence but had a loud voice and intimidating style? Being confident is a critical part of business, particularly when you are regularly involved in complex negotiations.

Donald Trump is not that much different than many of the effective leaders in the world. The amount of wealth he has and his personality are definitely differentiators, though. His “in your face” style is off-putting to some but refreshing to others. No matter what you think, the fact remains that Donald Trump has been an effective businessman we will have to wait and see his leadership legacy.

Leadership is not for the lighthearted

It’s important to realise that just because someone holds a position of leadership, doesn’t necessarily mean they should. Put another way, not all leaders are created equal. The problem many organisations are suffering from is a recognition problem – they can’t seem to recognise good leaders from bad ones and sadly bad leaders can be around for a long time creating local and global problems.

Effective leadership is critical in virtually any type of for-profit or service-based organisation. When company managers lack the ability to provide direction, coaching and training and motivation for staff, the organisational culture and morale often suffer and many employees fall behind in their abilities and will struggle to get another job should their decide to leave. Poor leadership can have several negative effects on the company and staff.

In most workplaces, high turnover can be a red flag for poor leadership. Poor leaders can have a negative impact on employees and might even damage the company’s bottom line. Bad leadership affects your company’s ability to retain employees and lowers employee morale, motivation and productivity but who sacks the leader!

Leadership and the bottomline

A tangible result of poor leadership is often poor financial results and low salary and severe cost cuts. To optimize production, sales and efficiency, a company needs employees committed to their jobs, the company and its vision. Poor leaders don’t inspire workers to deliver their best performance and to look for training and development opportunities. In the long run, a culture of poor leadership perpetuates across a company at all levels and unhappy employees do the bare minimum and leave dead on 5pm.

Workers who aren’t motivated and are burned out from a poor culture begin looking for other jobs leaving skills gaps and/or pressure on remaining employees. This further escalates profitability concerns for the business. This downward spiral is often difficult to get out of since companies struggle when they lose financial rainmakers, top performers and experienced employees and must replace them with new hires. Recruitment companies make millions from companies constantly having to recruit new staff, newcomers who join with higher expectations and leave months later because they can hear/see the cracks in the leadership.

In my view I would recommend that people in leadership and management positions take a good look at the effects of their leadership/management styles, making a point to learn about leadership the good and the bad types of leadership styles.

Leading from the front?

• The delegating leader – The leader trusts the group to decide and carry out the responsibility on it’s own. The members have the desire and are experienced and capable of doing the job. The members are responsible for directing their own affairs.

• The participating leader – The leader and the group members participate in making the decisions and carrying them out together. The group has the ability to do the job, but might lack the confidence to carry it out on their own. The leader puts more emphasis on the group relationship than on the task to be done. They encourage and compliment the members.

• The selling leader – This leader often needs to “sell” or persuade the group to “buy into” a job. The group is a little more responsible or experienced, but direction and guidance by the leader is still needed at this level. The leader should explain the decisions and give a lot of opportunity for clarification.

• The telling leader – This leader “tells” the members what to do and doesn’t worry too much about the feelings or relationships within the group. This is appropriate where members are new, inexperienced, lacking in confidence or need a lot of help and direction in order to get the job done. The leader should give clear directions and provide follow-up and feedback.

As a leader of my own business, I have come to believe that great leaders are disciplined in the way they communicate, only speaking publicly when they have thought through what they want to say and why they want to say it. Great leaders don’t react and attack every time they are criticized. These leaders are “other-centric” as opposed to “me-centric.” These leaders are less driven by ego and what’s good for them, as opposed to what’s best for those around them and the people they serve.

Name it to Claim it

The Art of Effective Communication for the Family Lawyer